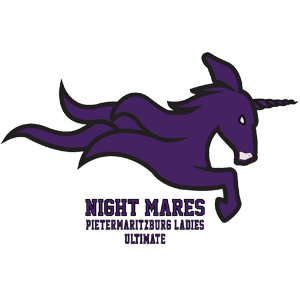 The Night Mares as a women's team encourage competitive play and we are not afraid to play hard. At tournaments we play with the vision to try and win all our games. We approach each game and practice with a positive attitude and with the goal of enjoying the sport and the company of other players. Our club consists of players from Pietermaritzburg, Howick and Durban. Our practices are open to all female players in the KZN region, not only players who live in Pietermaritzburg. The age of our players ranges from 16 - 45 years, but all age groups are welcome to attend practices. We strongly believe in upholding the spirit of the game which is essential to ultimate Frisbee. For us this means that we make calls fairly and retract calls where necessary, we avoid contact and respect our opponents on and off the field. We also welcome new players to join our team and to get involved in the women's ultimate training clinics that we hold, as such we are strongly pro- women's development and pro growth of the sport.

We are the prettier version of our Long Donkeys men's team! The Night Mares played our first National tournament in Durban in 2014, where we placed third. Subsequently, we have achieved second place at Women's Nationals in 2016 and again in 2018 (narrowly losing on universal point.)

Women's ultimate had a slow start in KZN, where we struggled to field the necessary number of ladies at tournaments. Slowly but surely these numbers have improved, allowing the Night Mares to form our own competitive team. We have a history of playing tournaments with very few players, but having a small squad has never stopped us from playing hard and from enjoying ultimate Frisbee at a competitive level. We pose a challenge to any team that faces us.

We are a tight- knit group of women who love being part of such an amazing team! From the younger teenagers, who are experiencing their first tournaments, to those senior players who have been around since the days of playing mixed ultimate with no lady subs, we are all learning new skills and improving our game by stepping up into roles that we don't usually play in mixed ultimate. We look forward eagerly to what lies ahead for female ultimate players in South Africa.